I may not be camping this week, but I have big cooking (and eating) plans. That really is the pursuit of happiness, isn’t it?

It’s almost a long summer weekend and that means it’s time for camping. Hopefully you are packing up tents and sleeping bags, making very long grocery lists, and trying to decide whether or not you actually need to bring your toothbrush (confession: I always bring mine but use it really,  really rarely).

As a family we didn’t take many camping trips, but I started going with friends in college. I totally understand how people may find it gross, or dirty, or just prefer sleeping in your own bed. To them I say this: camping is a study in contrast. The simplest meal of quesadillas and hot dogs tastes delicious over the open fire. Even if you’re on the ground, the air is so fresh you and it’s so dark you sleep like a log. And there is nothing to compare to that first shower when you come home.

So here’s a few of my favorite picks for camping – all picks that may heighten your enjoyment of our attempts get back to nature. As if birthdays themselves don’t make you feel old, Labyrinth is 25 years old this week. I believe it has gone down in history for introducing young kids to David Bowie’s music (and his incredibly tight pants).

Labyrinth is one of those delightful mid-80s movies that combines live action actors with Muppets. In the interest of full disclosure, I must admit: I love muppets. Not just of the Miss Piggy variety, but all flavors coming from Jim Henson’s creature factory. And boy, does the movie come through with the muppets.

Storywise, David Bowie plays the King of the Goblins, who captures Jennifer Connolly’s baby brother when she, a put-upon teenager, wishes him to be spirited away. She then must travel to Goblin land to rescue her brother, teaming with Muppets great, small, and gross, in the process learning some about friendship and growing up (aw!).

Watching it as an adult, you realize that Connolly, at sixteen, looks like a Renaissance beauty, and Bowie, in his natural predatory state, circles her like a hungry fox.  Is it slightly creepy? Yes. Can this be overlooked? Oddly, also yes.

Also as an adult you wonder: why did David Bowie decide to dress up like an elf attending a disco in a kids’ movie? Where was his career? Did he consider this an extension of Ziggy? These are not important questions; what is important is that it happened. And it may be his finest role on film.

Because what really blows the movie out of the water is the music, composed and performed by DB of course. I would be eternally pleased if every jukebox had a copy of “Magic Dance.” The rest of the songs aren’t too shabby either.

It’s one of those childhood movies that sticks with you. And yet it’s probably best not to watch it again until you’re showing another youngster, so as not to burst that happy bubble. Happy 25, Labyrinth!

And the Flight of the Conchords’ take on Labyrinth-era Bowie is pretty hilarious:

It has been gloriously HOT this week in San Francisco. I’m still recovering from a birthday picnic sunburn, so it’s been feeling like summer vacations of my youth (back, you know, when I had a summer vacation).

You could hardly call me a horticulturalist. Certainly I enjoy nature, but I have killed more basil plants than should be legal.

But this doesn’t stop me from being an enthusiastic, if ignorant, fan. After 8 years in the Bay, I finally made it to the Conservatory of Flowers in Golden Gate Park (it’s the ornate white building that looks like a cross between a mosque and a meringue).

I went to check out  a specific exhibit: Wicked Plants: Botanical Rogues and Assassins, based on the book of the same name by Amy Stewart.

The conservatory was quite small, and the exhibit was even smaller. Yet each plant had a detailed description, plucked from the book. You’ll find out fascinating facts like:

[The water hyacinth] is so horrible it has earned its own Guinness World Record as the world’s worst aquatic weed.

Reading the book was more on the facts-side than I would have wished, but I still learned fascinating tidbits like:

Quinine is the medication that saved the world from malaria, and its addition to tonic water gave rise ot that class summer drink, the gin and tonic. (This proved to be an easy way for British colonists in India to take a mild does of their medicine).

The whole feel of the show was like your creepy aunt’s Victorian garden: Gothic, romantic, and might just kill you.

The exhibit runs until October 30! Check out more pictures below.

The Dot And The Line

Have 10 minutes? You should definitely check out “The Dot and the Line,” an Oscar-winning animation short by Chuck Jones (Looney Tunes!) written by Norton Juster (The Phantom Tollbooth). The A.V. Club interviewed Juster recently and he said this about the film:

Norton Juster: The Dot And The Line was something that popped into my head one day, doing a little thinking about myself, not so much architecturally as socially. I was very much that rigid straight line. And I had a friend who was absolutely disreputable, would say anything, do anything, ran around like mad, had enormous success in both his life and with women. And he was the squiggle. So I view that story, a little bit, as my revenge.

What a mix of high and lowbrow this week! Happy weekending!

Read it. In my book club this month we read Things Fall Apart by Chinua Achebe, which I confess I had never read before. I had the Norton critical edition so I even did some extra credit reading the critical essays. Felt gloriously like school again!

Saw it. Another cultural milestone gap fulfilled – I finally have seen Point Break. And really dug it.

Heard it. So the only other time I have heart WTF with Marc Maron he was having a pissing contest with Michael Showalter. But this week he has Amy Poehler and it’s just about the most charming thing you’ve ever heard. Amy! How about you do a podcast! Just read your grocery list! I’ll listen!

Continuing with celebrity memoir week, I thought I’d share some impressions about Bob Dylan’s Chronicles: Vol. 1, a book that I bought when it first came out, then proceeded to never read completely until a recent long plane ride.

Throughout his career, Bob Dylan has proven himself extremely adept at refusing to take responsibility for his public image. He lies in interviews, purposefully misdirects, and generally has a palpable dislike for anyone, fan or journalist, who believes that he or she is “owed” a piece of him. In short, you must read Chronicles with a grain of salt the size of the Chrysler Building.

That being said, Dylan is a fine writer, at times both lyrical and direct. He divides the book into five parts: his early days as a folk singer in New York City, his attempt at family life in the late 1960s and early 1970s on a farm in Woodstock, and his later touring years in the 1980s.

Young Dylan was famously inspired by the folk singer Woody Guthrie. He tracked the dying artist down to a hospital in New Jersey, where he would visit him in the late 1950s and early 1960s. Reflecting on his younger self, Dylan recognizes the desire to do something different musically, to move beyond the tame folk resurgence to a movement with more teeth. He describes the musical, literary, and social influences that inspired his art, but:

The whole city was dangling in front of my nose. I had a vivid idea of where everything was. The future was nothing to worry about. It was awfully close.

Frustratingly, the book skips straight over his most interesting recordings, including Highway 61 Revisited and Blonde on Blonde. The next section picks up with an unhappy Dylan in the late 1960s, holed up in a farm in Woodstock. He’s trying to escape the responsibilities lingering from his early roots as a protest singer, actively recoiling from being any voice of a generation. The emotion behind this section rings true and even current.

The third and fourth sections might be the most tantalizing, as you glimpse his mid-career struggles. Dylan writes of his (relatively) recent past recording the album Oh Mercy (1989). He describes his frustrations with touring and a hand injury:

The previous ten years had left me whitewashed and wasted out professionally. Many times I’d come near the stage before a show and would catch myself thinking that I wasn’t keeping my word with myself. What that word was, I couldn’t exactly remember, but I knew it was back there somewhere.

How much is true? Does it matter? You’re a fan before you pick up Chronicles, not after. And if you are, it may make you appreciate the man even more.

Want more?
I created a Youtube playlist of songs Dylan spoke highly of in Chronicle: Volume 1. Listen and enjoy!

Top 5: Things I learned from Rob Lowe from reading his memoir 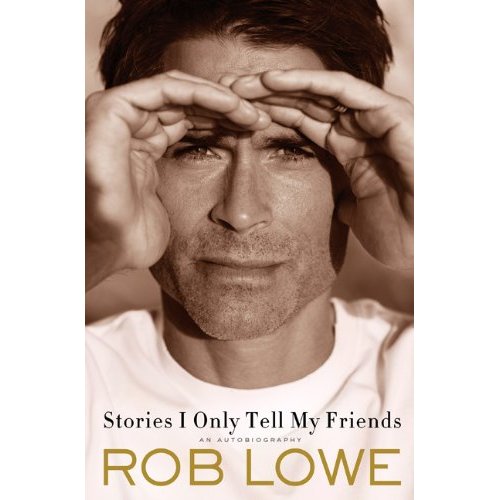 Stories I Only Tell My Friends, by Rob Lowe

1. Location matters. Lowe had liked acting ever since he was a little kid, but it wasn’t until his parents got divorced and he moved with his mom from Ohio to Malibu, California that his career as a TV teen heartthrob took off. While he was in high school, he was able to take the bus to Hollywood to go to auditions. And his neighbors and playmates? Emilio Estevez, Charlie Sheen, Chris (brother of Sean) Penn…

2. Learn from the masters. The strongest part of the book was Lowe’s telling of filming Francis Ford Coppola’s The Outsiders in 1983. He learned how to bring his acting A-game to the mercurial director, giving it all for 15 takes only to learn that Coppola had been filming a long shot. Most important on that shoot? Observing then-A lister Matt Dillon picking up ladies with a whisper.

3. Keep famous friends close. Oh, did you forget that Lowe has been famous some time in Hollywood? Because he hasn’t. And he’s willing to share some stories (although not the really saucy ones) about crashing Liza Minelli’s hotel room, about getting set up on dates as a child star with Sarah Jessica Parker, about conceiving his child at Sting’s country estate after a weekend trip with Pavarotti. He knows what people want to hear about: other famous people. And the book delivers, reading like a better-written People magazine.

4. Admit your mistakes. Well, kind of. Lowe definitely owns up to his debauched ways in the 1980s, and credits his wife and family for keeping him on the clean and sober path today. But the 1988 sex-tape controversy gets no more than two pages. And the West Wing pay kerfuffle that led him to quit in 2006 was similarly glossed over and not exactly explained.

5. When in doubt, be really, really good-looking. Because it never hurts.

Phew, even with a three-day week it is HARD to come back after vacation – especially a vacation as awesome as I had. Post to come soon. With… pictures.